So, we got up early, had breakfast, packed our things and headed over to the Hakata Station one last time to catch our Shinkansen train to Tokyo. 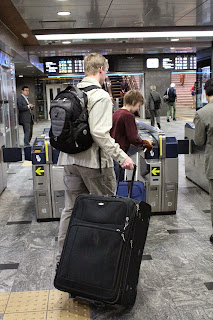 We went a bit early because we figured it might be a bit confusing figuring out the station in a foreign language.  We were right.  It was a bit confusing, but people were so kind.  Any time we looked like we didn't know where to go next, someone came over to help us.  We ended up being early enough to take some photos of an earlier train (below). 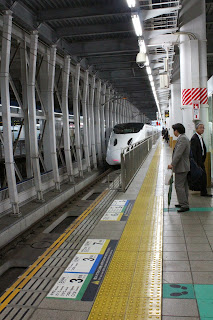 And stop at a cafe for a couple coffees, and iced tea and a shared treat. 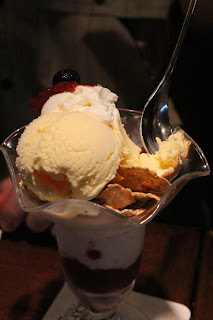 Ethan is in charge of the coins.  I picked up this change wallet a few days ago.  He pays for anything under 1000 yen.  He loves this. 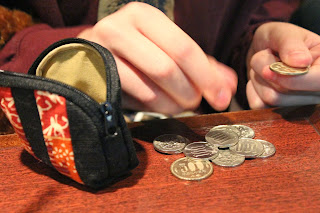 We took a walk about the station before heading up to the platform to wait for our train.  Food, spirit and gift shops were plentiful.  I stopped at a bookstore to pick out a couple gifts for friends. 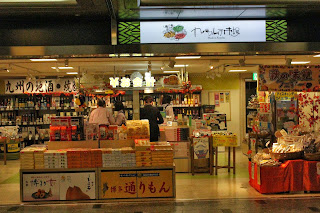 These rice balls looked interesting and yummy.  We didn't get one though.  We were kind of laden already with our luggage. 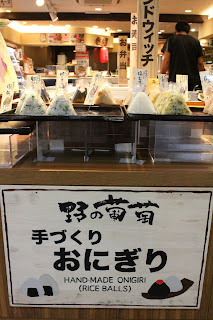 We made our way onto the platform just in time to see our train pull in.  We all were full of anticipation at how fast the train would go and feel.  It was fast, but very smooth.  At one point Ethan made up a riddle.  "How is it possible to be traveling 200 miles per hour while sitting still at the same time?"  Riding the Shinkansen!  Ah, Einstein's theory of relativity in practice.  :-) 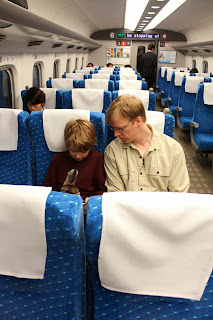 We left Fukuoka under cloudy skies.  Off and on it rained throughout the day.  I didn't get a chance to see Mt Fuji.  It has been too overcast and foggy.  I did see smaller mountains all along our ride. 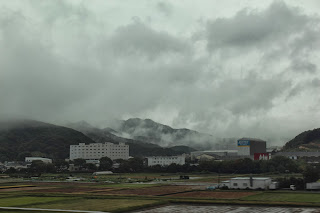 This is a view of the track below.  I was expecting something different.  I'm not sure what though. 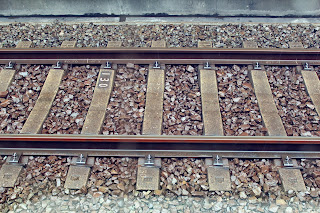 The conductor came by and tore our tickets midway through the trip.  These stubs will make nice mementos. 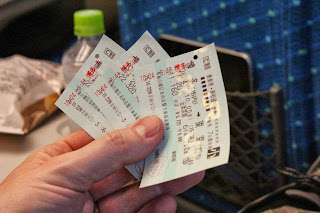 There was a fair amount of factory and industry along the way.  This seemed to come out of the mist and looked kind of science fiction-like to me. 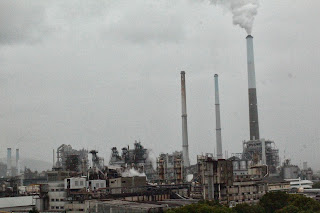 As did this petroleum production facility.  (That is what Doug guessed it was.) 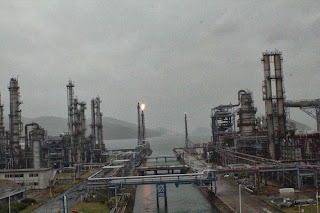 I took these next two photos for you, mom.  This is Hiroshima today (at least from the train).  Both my mom and dad lived during the second world war.  My mom and I talked briefly about this time and Hiroshima specifically before I left on this trip. 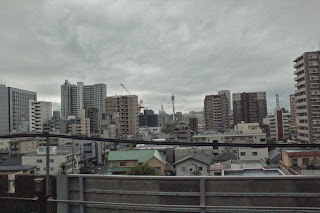 Here's a view from along one of the rivers.  Sorry it's not clearer. Partway through the journey we decided to play a game of cards.  We also played a Klutz travel game (thanks Hallie), read Teen Titans Go! and played on the iPad. 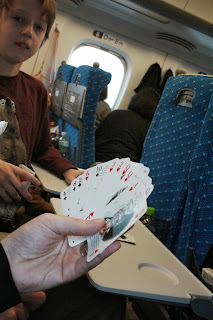 This was a view of a Temple in the city of Kyoto. 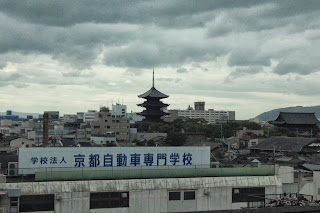 There was very little flat area that wasn't farm land of some sort.  The fields went right up to and in and around the houses, factories, cemeteries, rivers, bridges and roads.  Most of the farm land looked like it was rice, but there were many other crops growing as well. 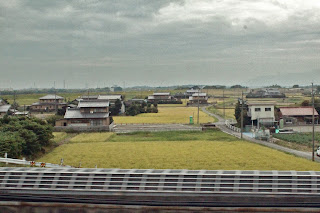 We made it to Tokyo Station! 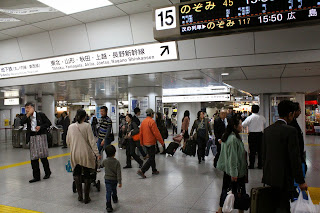 And then headed out to get in line for a taxi to our hotel.  I liked the traditional dress of this woman in front of us. 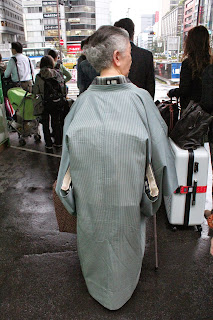 She was watching a protest taking place.  Of course, we could not understand what the people were protesting, but it was very interesting to observe.  It is hard to tell, but there is a van in the front of the people.  This van had loud speakers with a person shouting protests.  The people behind would call after the loud speaker.  There were numerous processions of people and vans.  We wondered if it was in protest to the reopening of the nuclear power plants.  People have been protesting this for months. 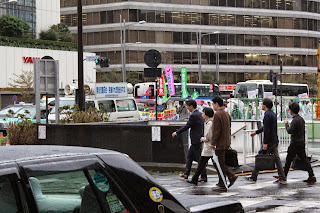 Our taxi dropped us off at our hotel not too far from the station.  This was a view from the entranceway.  Wait!!  This wasn't our hotel.  We were in the wrong place.  Again as we stood around looking confused, a group of five men came over to graciously help us.  They told us we needed to go to that tall brown building on the right.  So, we said "Arigato!" and began walking. 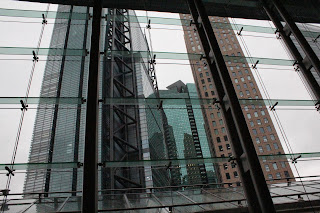 As we walked we stumbled across this most magnificent clock that had me thanking the Gods of Mistakes for putting us in the wrong spot to begin with.  It was a huge wondrous mechanical piece of time telling whimsy.  I loved it! 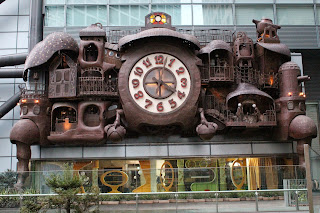 This is a detail of the right side. 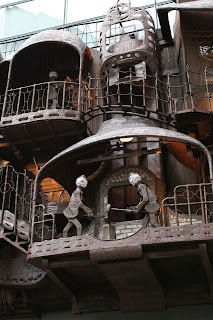 Here is a detail of the left side.  This particular side reminded me of the video game Machinarium.  If you like video games but haven't played this game yet, you must check it out. 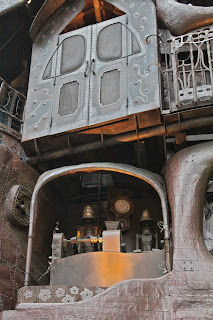 We made our way to our hotel.  There was a bit of confusion about our room, but it all got sorted out.  We are on the 34th floor!  I've never slept so high in the sky.  Here is a view from our room. 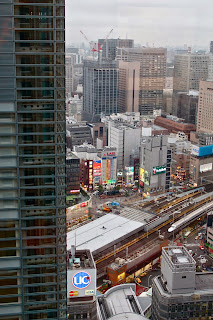 Right across from another window rows and rows of people worked away in small cubicles.  I found this sight a little depressing.  Hopefully these people like their jobs, whatever they are. 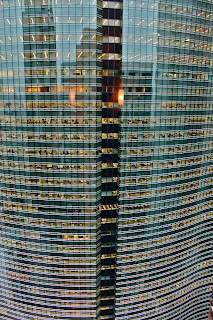 We went in search of food again.  This store sign below made us all smile.  It reminded me of a t-shirt I saw yesterday that had a famous Western saying translated in an interesting way.  The shirt was written in english and read "Nothing tried.  Nothing have."

Today we tried to order ice cream in Japanese, but I think what we were saying translated to a greeting because every time we said what we thought was ice cream the woman bowed and said "Konichiwa".  Finally I said "ice cream" in english and she thankfully understood what we wanted.

I have to say, I have much more compassion for people traveling to the US not knowing much english.  It's certainly not easy trying to make oneself understood when one doesn't understand the language.  It has, however, also given me a greater appreciation of our similarities.  Considering our cultural and language differences, it is amazing how well we actually can understand and sympathize with one another when we want to make that effort. 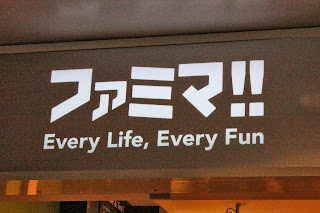 This was a view from the restaurant in the evening.  This city is huge.  It's a bit mind blowing actually.  This is but a teeny glimpse of the vastness of it.  We are only here a couple days, so we won't try to be too ambitious.  As Doug said over dinner, we could live here a lifetime and not see the whole place. 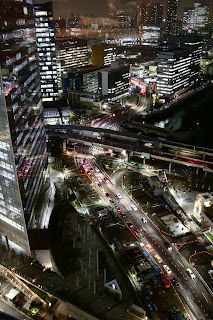 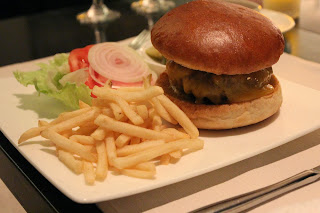 I have no idea what Ethan and I will be doing in this huge metropolis tomorrow.  Doug is speaking at the University of Tokyo, so he won't be with us.  After tomorrow though we all get to explore together.  I'll save the best sights for when he can join us.