Storms Passing. A Day in Yokohama.

We awoke today to rain that blew horizontally at times.  I looked down at the streets below and saw only one person walking under an umbrella that would flip inside out, then back again.  The typhoon was beginning to pass us, but wouldn't hit full force.  There's a stronger typhoon passing close by too.  It will likely collide with the first one in the north of us some time in the next few days, creating a Fujiwara effect.  Last night, while we slept, there was a 7.3 earthquake off the coast of Japan closer to Fukushima than Tokyo, but apparently it could be felt here.  None of us felt it though.  Then, there was a small tsunami that hit Fukushima.  Poor people.  They do not need any more natural disasters.  None of these occurrences caused any major problems that we are aware of.  What an amazing series of events.  We're grateful everyone is safe.

At any rate, we went for a buffet breakfast in our hotel.  Doug took this picture of Ethan and I at the table. 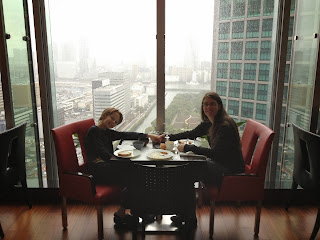 We decided to head to our hotel in Yokohama in case the storm got any worse.  We were nervous about traveling during the height of the winds.  Check in wasn't until 2pm, so left our luggage with the hotel and headed out to have a look around.  It was pretty rainy and windy.  Thankfully there were umbrellas we could use. 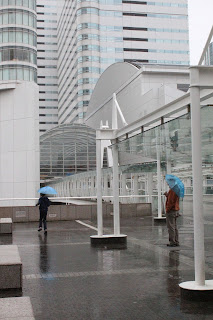 Poor Doug.  His umbrella blew inside out and broke.  This delighted some of the people around us.  We all had a laugh about it too. 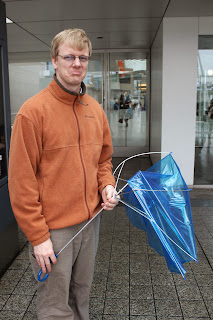 We passed through a shopping arcade.  There sure are a lot of shopping arcades around these parts!  We went on a hunt for ice cream for Ethan.  The Yokohama Museum of Art was close by.  This wonderful sculpture was out front of it.  We didn't go into the museum. 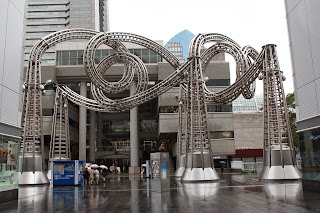 I took a couple details of the sculpture.  I liked this one of it from below looking up between two tall towers.  The one on the right is called the Landmark Tower.  We went up that one and had a view of the passing storm from the 69th floor.  The Landmark Tower boasts being the tallest building in Japan and holding the world record for fasted elevator.  It certainly was fast.  Going both up and down popped our ears. 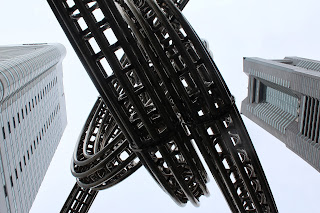 The views were clearer than we thought they would be, but not really worth sharing.  We could see a bit of the Tokyo skyline.  We couldn't see Mt Fuji though.  It appeared, however, than the rain was slowing down.  It looked like the worst of the storm was passing.

Once in our hotel, we rested for a little while.  Ethan played some games on the iPad.  Doug napped.  I read a bit.  By the time we were ready to go and explore again, the sky was clearing and the sun was setting.  This is a view of from our hotel.  You can see Tokyo in the distance, and Yokohama Bay in the foreground. 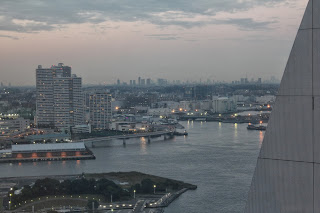 We decided to treat ourselves to a nice Japanese dinner.  Doug and I had course meals, with eight courses of traditional Japanese dishes.  They were absolutely delicious.  By the end I was a bit too full, but it was worth it.  Ethan had a beef stew with white rice. 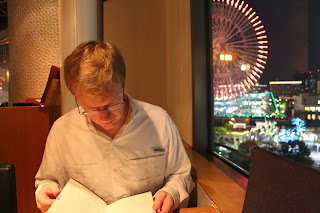 Doug and I shared some Japanese sake.  That was lovely too.  I especially liked the small pouring pot it was served to us in. 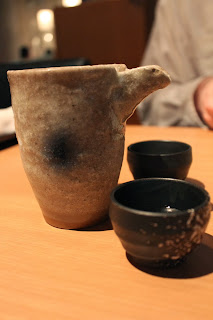 We wandered over to an amusement park across the street from our hotel.  Ethan finally got to try a Pachinko game.  He had been wanting to find one. 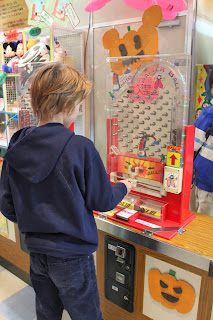 Doug and Ethan went in to explore this Ice House. 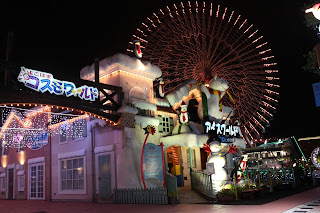 This was a photo Doug took while inside.  When they came out they were really cold.  Doug said he was starting to feel numb.  His glasses fogged up in the warmer outdoor air. 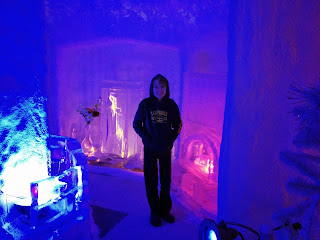 We headed over to ride on Japan's largest ferris wheel.  Doug and Ethan got tickets for the three of us. 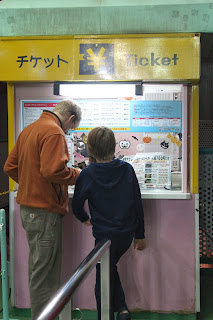 I'm not sure how tall the ferris wheel was, but it was at least as tall as our hotel which was 40 floors.  (I had thought it was as tall as the tower we went up earlier, but when I looked out at them both, I realized I was mistaken.)   From the ground it really didn't look too bad, but once we got in and started to climb, I panicked a wee bit.  Ethan was scared too.  After we reached the top and started to descend, we both felt a lot better. 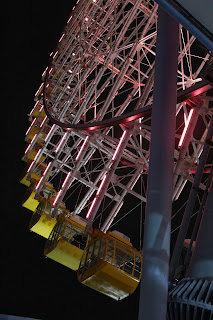 This is a view from inside the car. 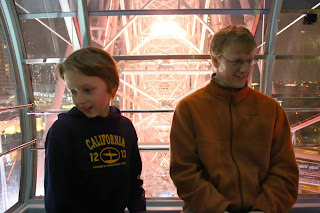 This is a bit of a view of the city as we were descending.  I literally couldn't move to take photos while we climbed.  I didn't want to freak Ethan out, so I sat quietly, but I was quite frightened for the first part. 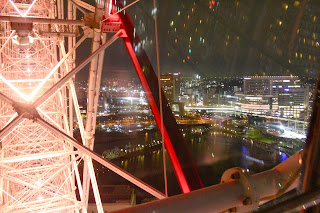 Back in our hotel I took this photo of the city.  It's quite a nice view. 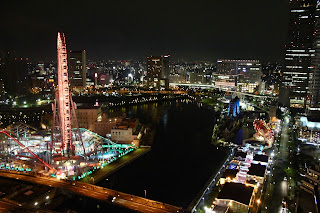 One last day tomorrow and then we head for home.  Apparently there is a very large China Town here in Yokohama.  We might head over to see that.  Or we might do something else.  Everything is new, so the options are wide open.

The storm has passed now.  The night is quiet.  When I look down into the streets I see many people walking around.  The weather looks good for flying Monday.  We'll simply plan to enjoy ourselves tomorrow.  Good night!