A couple things I've noticed about the taxis here in Fukuoka are that the seats are always covered in a white fabric - both the front and the back.  The drivers who dress more formally seem to have more decorative seat covers too - more like lace doilies.  Another thing is that the driver is on the right.  In my sleepy state that first night we arrived I didn't notice that the driver was on the opposite side when I sat beside him in the front seat, but I felt oddly uncomfortable, like I was forgetting something.  I think my tired brain thought I should have been driving. 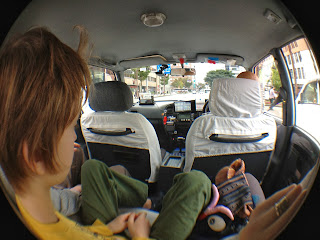 Another thing I noticed just today was that some of the signs in the taxies have braille on them.  I wondered if the brail is in Japanese script or Roman letters spelling Japanese words. 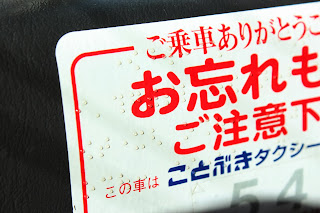 Doug had to work today.  It was the first day of the conference he will be speaking at.  For those interested, the conference information can be found here.  Doug's work is third from the left.

Ethan wanted to return to the beach again, so we headed in that direction to start our day.  Ethan loves to play in the sand.  He makes up a game where mounds of sand are blasted to bits.  There are a lot of detailed components to this game.  It's fun to watch him play. 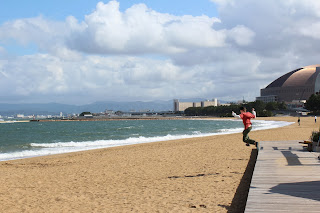 This below was the first in a long series of big blasts! 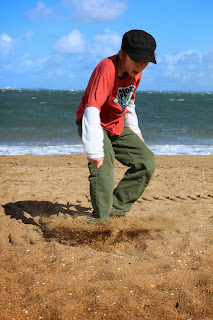 After playing a while on the beach, Ethan got an ice cream cone.  Then we wandered over to Robo Square where we decided we were still hungry enough to try to find some lunch.  Ethan picked a Korean restaurant.  I had the dish below with clams and tofu.  Kimchi and other pickles were on the sectioned plate at the back.  Rice was in the stainless steel bowl. 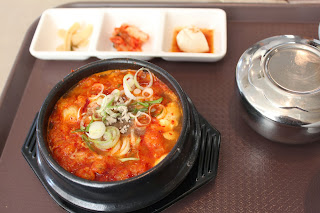 Ethan had this beef stew-like meal with rice and an egg, and miso soup on the side.  The woman who helped us pick our lunches did not speak english, so we picked our meals from pictures posted above the kitchen.  That strategy seems to work well for us. 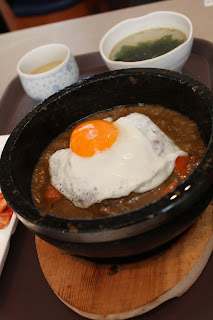 After lunch, we headed over to the Robot Museum.  It wasn't big, but it was very sweet.  Most of the robots were interactive, meaning we could talk to them in Japanese, and some of them we could stroke like a pet, causing some cute reaction.  This one below was employed to cheer up elderly patients in a nursing home.  It has very endearing emotional reactions to being talked to and touched.  It is meant to solicit a heart warming feeling.  It succeeded, I think, judging from the reactions of the women in the video. 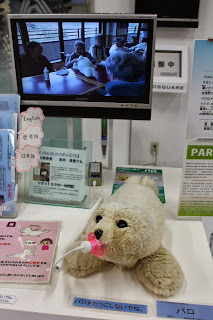 Also on display was a circle of Japanese robot toys.  They looked fun.  I wish I could have seen them in action, but we couldn't touch these ones and they didn't move. 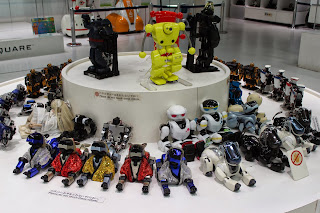 Once outside again we found that the wind had picked up off the ocean.  Ethan enjoyed playing with that - pretending to resist it's strength. 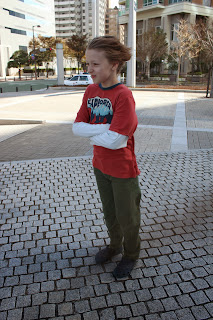 Another destination Ethan requested was Ohori Park again.  We had walked past a playground there yesterday.  Ethan wanted to return and see if there were any children playing today.  We stopped at a family restroom along the way, but had a hard time figuring out how to close the door.  I remembered a video Doug had shown me last night on some tricks to help people learn Japanese scrip.  The symbol for door came to mind when I saw these buttons on the lower part of one wall, so I pushed the green one.  Lo and behold, the door shut! 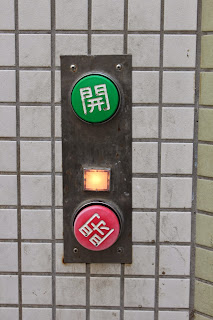 On our way to the playground, I spotted a couple of ducks I hadn't seen (or noticed) before. 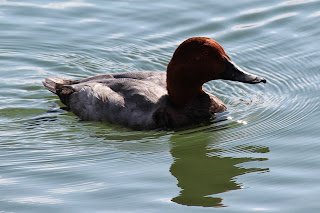 I'm not sure what kinds of ducks these are, but they were pretty. 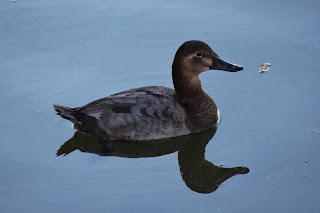 Once we found the playground, we saw that there were indeed quite a few children playing there.  Most of them were younger than school age, but there were a couple children that seemed a bit older.  Ethan enjoyed this inclined wall.  Kids were climbing up and sliding down.  They all seemed to be enjoying themselves. 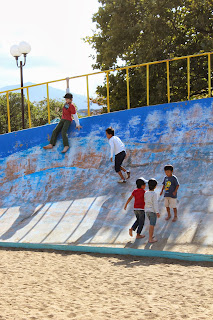 This was another concrete structure.  A little boy was interested in what Ethan was doing sitting on the top. 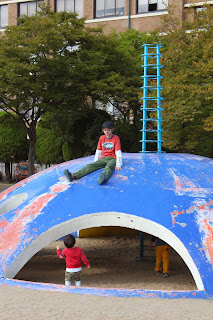 We left the playground and walked in the same direction from which we had come yesterday.  Along the way I spotted these trash bins with bike wheels for lids.  I thought that was pretty clever. 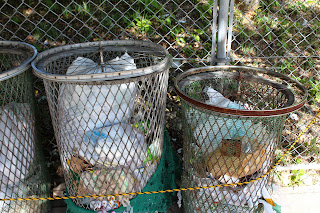 We walked past the castle ruins again.  There was excavation work in progress today.  Ethan enjoyed watching how they moved the dirt using buckets and rope up and down inclines. 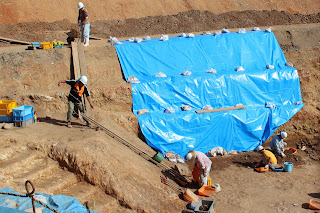 We came upon a cute recycle bin.  Ethan put his plastic bottle in the side marked bottles.  When he returned he commented that both the can and the plastic bottle holes led to the same bin.  "An illusion of choice," he laughed. 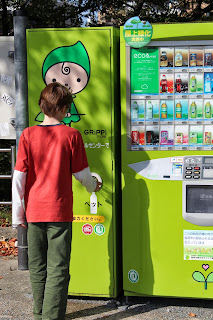 Every time I see someone riding by on one of these bikes I think of you, Phoebe!  Many men and women seem to like this design. 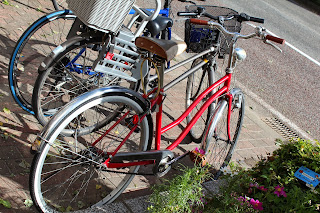 These below are common too.  It's hard to see, but the one in the back has very small tires, and a low frame.  I see many people riding these.  I wouldn't mind trying one to see how it feels. 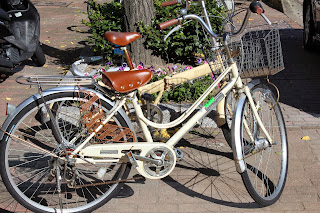 On our way back to the hotel, Ethan chuckled at this poster. 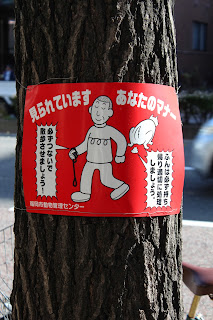 After a bit of rest at the hotel, we headed out for dinner again.  We decided to go to the Hakata train station.  It is the station from which the Shinkansen arrives and departs in Fukuoka.  We will be taking that in a few days when we head to Tokyo.  It's a very busy station with ten levels of shops and restaurants.  It was teaming with people.  Before we entered the station, we happened upon this set of curious footprints and signatures.  It looked to me like a Japanese version of the Hollywood Walk of Fame.  Later, I discovered that it is a monument to the Fukuoka Marathon winners from 1947 to 2012.  Funny how my Canadian/American influence colours what I see. 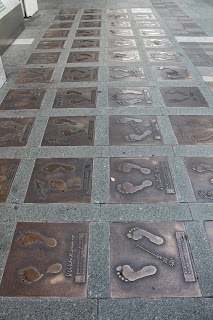 I may be mistaken, but it seems to me that the escalators rise and fall on opposite sides.  I keep wanting to go up the wrong side.  Of course, that could just be because I'm naturally disoriented.  :-) 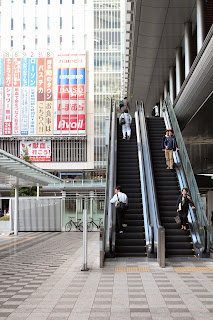 We took time to look at some of the shops in Hakata Station as we rode the escalator to the 9th and 10th floors where the restaurants were located.  It was interesting to see how things were very similar, yet slightly different.  The kitchen shop, for example, had displays of bowls in place of plate place settings. 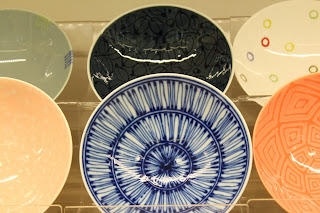 The book store literally had walls and walls of comics and anime. 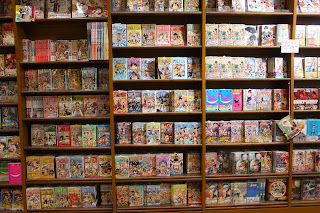 In the restaurants, many of the chefs prepared food out in the open. 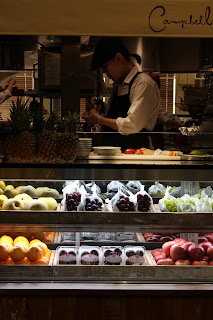 Ethan picked this place to eat.  I liked the floor. 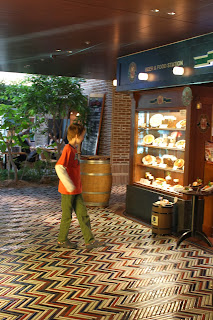 It was around 5pm when we sat down to have dinner.  Back home, that would be around 4am in the morning.  We were both feeling a bit tired by this point.  I commented that it was kind of funny that by the time we got up tomorrow morning we would be starting Tuesday, while our friends in Ithaca and family in London, ON would still be ending Monday. 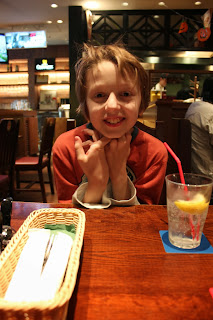 We finished eating and headed pretty much right back to our hotel.  Along the way I spotted this fun yet dire warning on the sidewalk.  Ethan asked me if I was going to take pictures of every ordinary-but-slightly-different thing I found.  I replied, "Maybe so!" 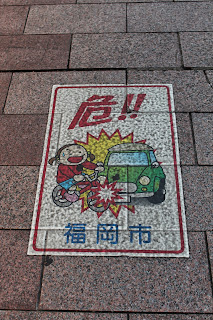 Ethan's closing his eyes now.  It's only 7:30pm.  We'll likely be up at 5:30am again tomorrow.  Ethan laughed this morning when he got up at that time.  He said he now knew how his friend Nick felt getting up so early.  This morning he and I watched the sun rise while Doug slept a little longer.  It was nice.