A Quieter Day, Not Necessarily by Choice, But Nice Nonetheless.

Ethan made use of the blanket we brought with us for the plane ride this morning in our hotel.  It was a cape. 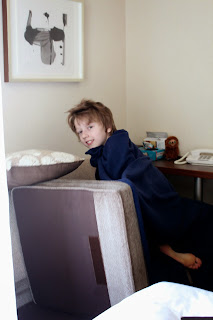 It had invisibility properties. 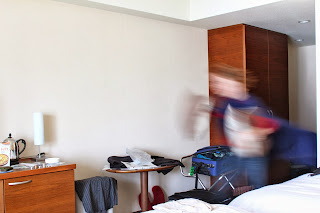 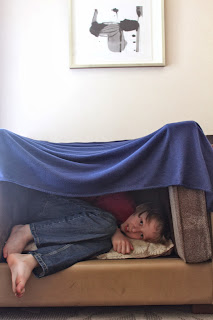 Doug spent the day at the conference again.  Ethan and I decided we wanted to visit the Fukuoka Historical Town, which according to the information we found online was a living museum.  It was said to have a historic town complete with a Ninja house with hidden doors - a special attraction for children.  Needless to say we were very excited to visit here.

I had tried another time to find our way to a place of interest, but I wasn't able to communicate my request well enough to be understood.  Today I brought a map so that I could point to the place I wanted to go.  The map had both English and Japanese, and the Historical Town was well marked.  Thinking we were all set, we headed out.

Before going to the museum, I wanted to walk to a nearby Temple.  We had passed it numerous times but hadn't visited.  So, we started the short walk in the direction of the Tochji Temple.

We saw orchids for sale in shops along the way. 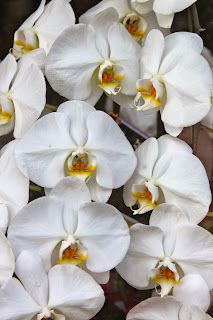 There is a small vase with one branch of these orchids below beside my bed in our hotel. 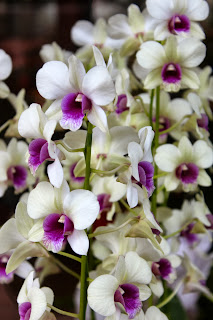 Right before we got to the Temple, we saw this sweet shop.  We stopped in to look around.  There were so many delicious looking options.  Most look like they are more savory than sweet.  Very different from the bakeries I am familiar with. 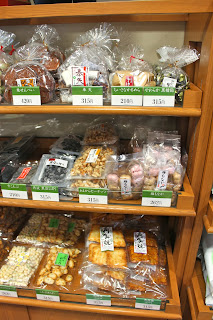 Ethan decided on a mango ice cream.  He commented on how much he liked the design of the cone - perfect for stopping those sticky, bothersome drips from the inevitably melting ice cream.  Pretty too. 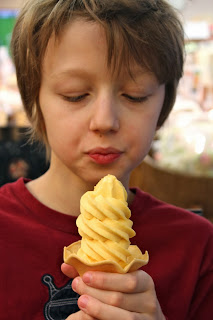 This guy greeted us at the entrance to the temple. 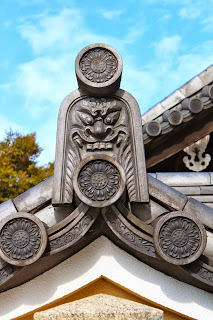 Shortly inside the gate, this lotus flower water fountain sat, looking significant.  I do not know the purpose of it.  Still, it seemed very serene, and I liked the water ladles. 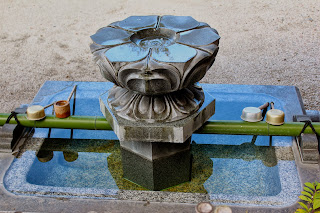 Beautifully pruned ornamental trees decorated many areas of this Temple grounds.  I found it fun to see the juxtaposition below of the use of modern technology and an ancient traditional practice.  This gentleman was slowly and carefully pruning every branch while employing this crane lift.  I wonder how it was done hundreds of years ago.  I assume a ladder.  Would the trees have been encouraged to grow so tall? 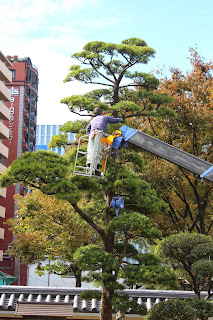 Like many of the older buildings in Fukuoka, the rooftops are gracefully curved and beautifully ornamented.  On the second floor of this building the second largest Buddha in Japan sits in the lotus position behind a large gong above an incense shrine.  It was truly beautiful, all carved from a dark wood and modestly painted.  We were not allowed to take pictures of the Buddha.  I am not a religious person, but I was very moved by the gentle spirit of the giant carving. 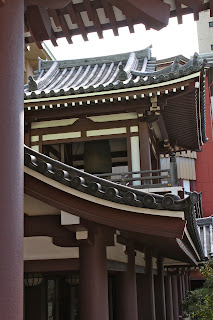 Again, I am not sure of the significance of this building below, but when we walked around the corner and came upon it's bright colour and rich decoration we were stopped in our tracks for a moment. 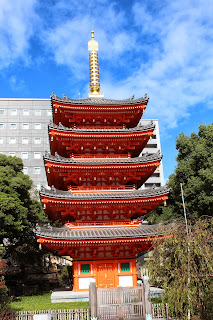 I liked the curves of this rooftop and the sliding doors at the entrance to this building. 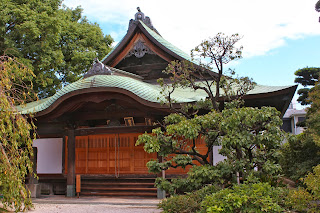 It is humbling to see an environment so old amidst so many modern skyscrapers.  Fukuoka is a tall city, reminding me a lot of Vancouver, BC, but bigger.  It also houses many pockets of ancient and recent history.  I find that fascinating.  It's also interesting to see how some of the traditions have endured and are present in modern form in many of the new structures. 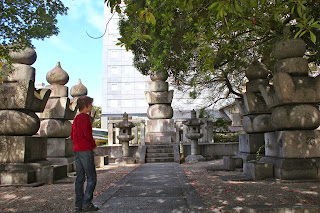 These mill stones decorated many parts of the grounds.  Ethan recognized them right away from the mill stones he has seen back home. 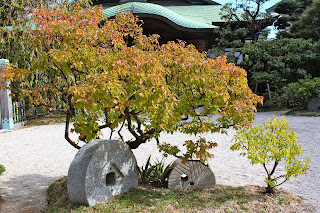 As we explored behind one of the buildings, I happened across this spider.  Once back in the hotel, I discovered it to be a Giant Wood Spider (how's that for a name), a cousin of the black widow, but not as poisonous.  It's hard to tell from this photo, but this spider was very large (though not exactly giant).  We decided to turn back the way we had come, and carry on with our plans for the day. 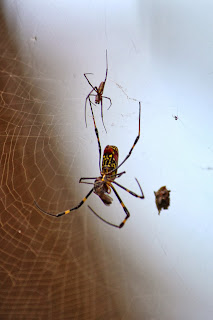 According to our hotel map, the Historic Town was on the outskirts of Fukuoka, and a little ways off the subway line, so I decided I would feel more comfortable taking a taxi.  While riding toward our destination, I spotted this advertisement in a holder on the back of the passenger seat for a NY Style Shooting Bar.  Inside the pamphlet, there was a photo of the inside of the bar, showing where one could sit at a bar and have a drink while another aimed and shot a gun from a center sound proof, glass walled room.  Hmm. 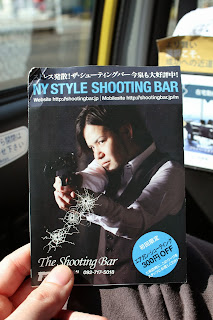 We traveled quite a distance in the direction of the Historic Town.  The scenery was lovely with the mountains in the background.  The driver had to check numerous times with someone on his cell phone for directions.  We finally got to the location to find it boarded up, graffitied, and seemingly burned in a fire.

Our taxi driver then got out of the taxi and began to run around knocking on surrounding home doors in a quest to find the whereabouts of the Town.  In the meantime, we sat in the still running car.  I wanted to tell him that he didn't need to do that, but I knew he wouldn't understand me.  So I watched somewhat helplessly as he ran around frantically.  Finally, he came back to the car tired and saying "sorry".  I told him the name of our hotel because it was the only other place I could think of to tell him to go, and he began the drive back.

He turned off his meter.  I pointed at it to tell him to turn it back on.  But he waved me away.  It was a long drive back.  He took another route, so we got to see some new sights.  Once back at our hotel I wanted to double our fare so that I was paying for both directions but he wouldn't let me.  I tried saying "please" (kudasai?) in Japanese, but he voiced a stern "NO!" So I left it.

When Ethan and I got out of the car, he apologized again.  I silently wished that I could communicate better to let him know how much I appreciated his efforts.

From our hotel we headed out to get some lunch.  We went back to an area we found on our first morning walk about.  We saw many shops along our way.  I picked up a sweet little cat for a friend from this one shop below, and a change purse for myself.  Japanese coins add up.  I thought the loonie and the toonie contributed to a pocketful of change in Canada, but here in Japan we have the equivalent to a five dollar coin as well. 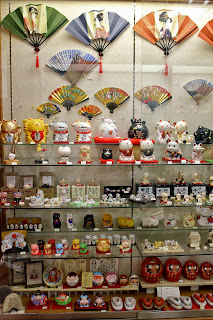 Ethan picked an Italian style restaurant to dine at for our lunch.  It was yummy but not like any Italian food I've ever had - which is likely not like authentic Italian food at all.  I don't know though.  I haven't visited Italy.  We have a friend from China who tells us that there is no authentic Chinese food in Ithaca.  He brought us to a restaurant in New York City that he said was as close to authentic Chinese cuisine as he has yet to have in the US.  He said Chinese food in America is Americanized.  I thought of his observation as I ate our Japanese version of Italian food today, and I chuckled to myself at the similarities held in our unique interpretations of each other's foods and customs.  I also thought of a little restaurant we passed in the market today called the "L.A. Diner". It served Japanese versions of hamburgers and hotdogs. 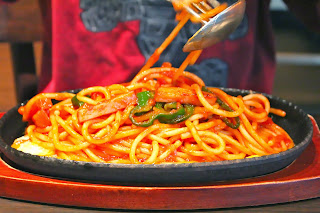 We headed back to our hotel after eating our lunch, but stopped at the 7-eleven first for some hotel room snacks.  I REALLY needed to have this green tea Haagen-Dazs ice cream.  It was so good! 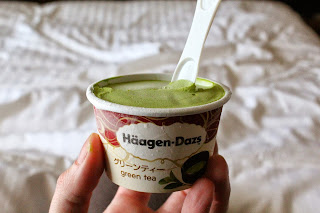 Doug came back from work and showed me this photo he took as he was traveling around today.  He said "Even the constructions sites are cute." 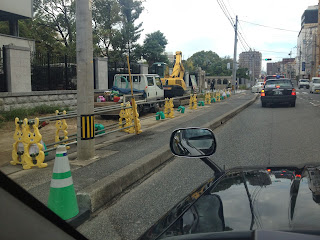 We all had a banquet for the conference to attend tonight.  It was a small event and very nice.  We got to meet Ken Anjyo and Ayumi Kimura, both Supervisors on the Pokemon series of anime.  Ken showed us some of his past and present work.  Currently he is working on a Pac-Man series for the Disney channel in the US.  I haven't seen it yet.  Both Ken and Ayumi humbly asked us if we knew of Pokemon.  Ayumi was delighted to learn that Ethan had actually been Raichu one Halloween not too long ago.

Ayumi told us what she believed to be the two most important words to know when traveling in Japan.  "Arigato", which is an informal way of saying thank you.  Ethan likes to say this often to people.  "Oishii", which means delicious.  She said we should say this when we eat at a restaurant.  It will delight our hosts.  Ethan proudly told her the few words he has learned.  She was very interested in the fact that he wanted to learn her language.  She asked him why he wanted to learn it.  He replied "Why not?"  She laughed.  "Yes!" she said "Why not." 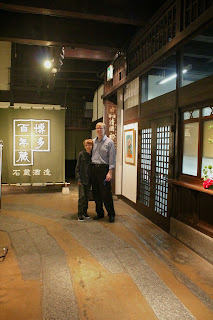 So the day was quieter, but the evening was more eventful.  It's after 10pm and we are still up.  I think we are adapting.  Our night owls will not be suppressed for long!