We awoke in the clouds today, and they remained all day, evidence of coming storms.  Below is a view from our window.  I still haven't seen Mt Fuji!  I can't believe I might leave without having seen it.  As long as we leave safely, that's all that matters.  It's been a great trip so far. 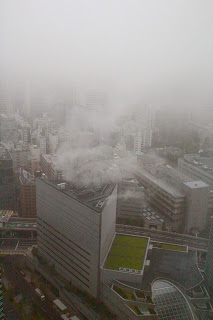 Another morning greeting was a protest on the ground beneath our hotel.  It looks similar to the one we saw the other day, though, of course, there is no way for me to know.  The talk from the megaphone was clear in our room 33 floors up, but, of course, it was in Japanese. 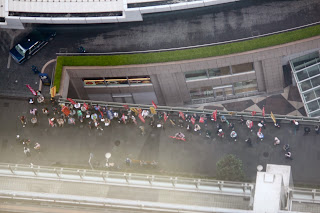 Since it was raining and overcast today, I figured there was not much point going to the tall towers. So Ethan and I headed to the Sony ExploraScience Museum a short distance away.  Once we arrived at our destination, we could see a little way into Tokyo bay. 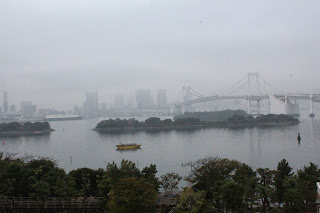 I was surprised to see a miniature version of the Statue of Liberty from New York City. 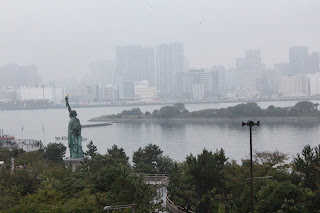 Once inside the arcade where the Sony Museum was, we found this very cool large drum.  I wanted to try it.  Ethan didn't think that was a good idea.  ;-) 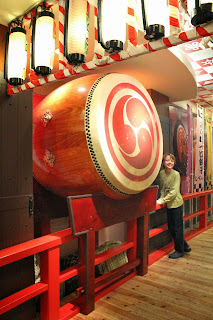 We walked through a Leisure World with many games, blinking lights and sounds.  It was too loud and dominating for Ethan.  So we didn't stay. 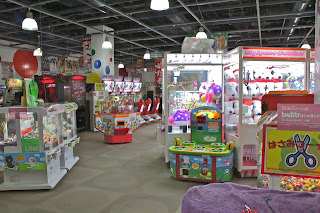 We found the museum.  We weren't allowed to take pictures inside, which is really a shame because Ethan was pretty cute with a few of the exhibits.  He seemed to especially like the video installations that allowed him to move in front of a camera generating visual effects on the screen in front of him.  He danced, jumped, twirled, and performed magic.  It was very fun to watch.  I animated a giant stuffed rabbit on a screen through motion capture, so I had some fun dancing too.  In general, the exhibits were fun.  The language difference didn't effect much at all. 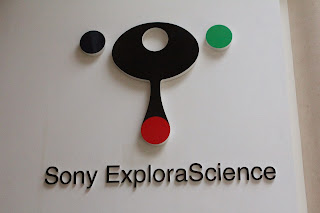 We stopped for lunch and another ice cream.  We had no problems ordering this one.  ;-) 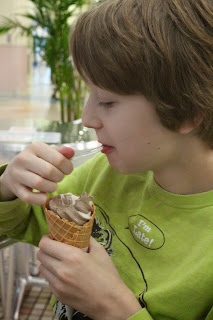 Once we left the museum we decided to walk around a bit to see some of the area.  I found another pretty manhole cover. 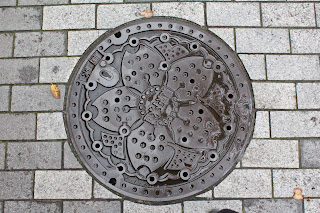 And some interesting modern architecture. 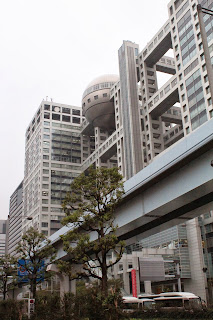 From this position it looked very sci-fi, I thought. 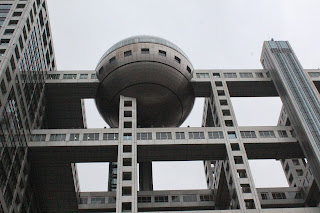 Ethan likes these bike ramps that go up the center of stairways.  He ran up this one and we discovered a suspension walking bridge over a river. 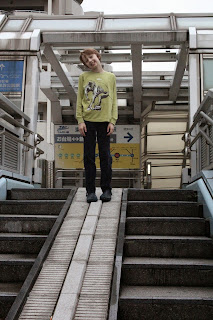 We crossed over to the other side. 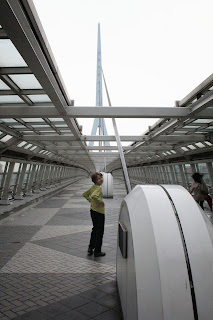 And found a giant ferris wheel.  On the train I had seen several similar ferris wheels in large cities along our route.  Ethan didn't want to ride this one today.  Apparently, the one in Yokohama, where we'll be headed tomorrow, is the largest ferris wheel in Japan.  He wants to try that one. 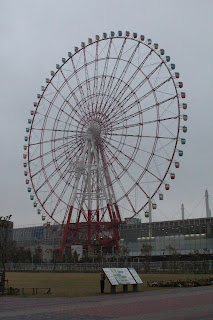 Ethan found this fun sculpture with mist coming from it.  He danced here for quite some time. 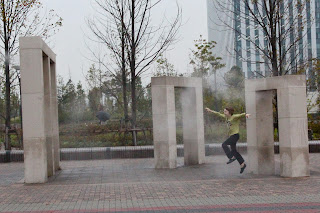 Two more sci-fi-looking buildings stood in the distance.  I'm sure there are many in Tokyo.  This is one HUGE city. 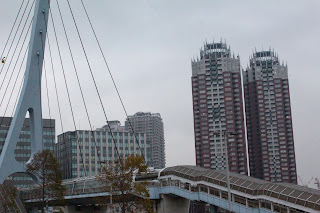 As we have walked around Japan, both in Fukuoka and here, I've seen these decorative structures around most of the trees.  I thought they were only for decoration, but then I remembered the typhoons heading our way, and I realized these serve a practical purpose as well.  It's obvious from the way most trees are anchored that wind in this area is an ongoing issue to contend with. 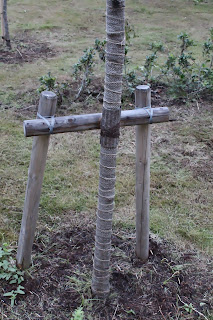 Doug made his way back to the hotel after 6pm, and we all headed over to the Akihabara district to see some technology, anime and comics.  It was busy!  You can't tell from this photo, but there were a lot of people.

Young girls dressed as anime Maids from Maid Cafes were soliciting business in many areas.  I didn't know who they were representing or why they were there, and I tried to take their picture, but they hid their faces.  I knew then that there was something I wasn't aware of and respected their privacy.  Back in the hotel I looked up Maid Cafes.  Now *that's* a strange trend.  Similar to geishas it seems. 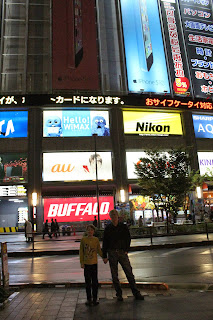 We walked around looking at some of the sights. 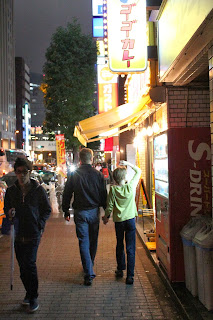 I liked the steam in the window of this restaurant below.  Meat skewers were on the grill. 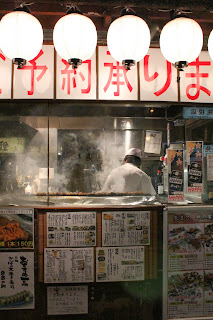 Here below are floors and floors of costumes it seems.  We didn't go in.  Ethan was feeling a bit overwhelmed.  We didn't stay too long actually. 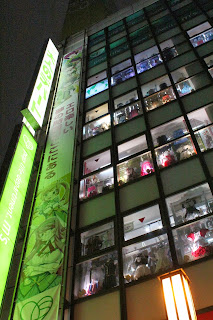 Here is another view of the area.  You can see a glimpse of anime on the billboards on the walls. 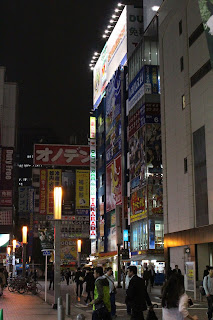 Doug was excited to see this space invaders sign and the origins of a game he loved as a boy. 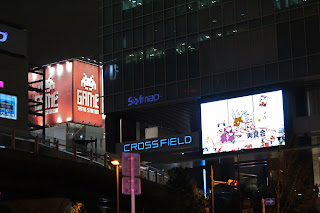 Back near our hotel, men (and a couple women) played a Wii game of baseball in a restaurant.  Their cheers were loud.  It looked like they were having a great time.  What a fun idea! 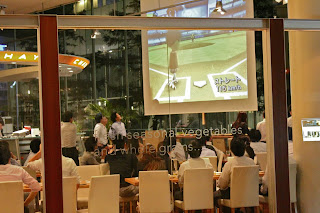 Tomorrow we head for Yokohama for two days and then we make our way back to Ithaca.  We are all getting a bit tired, though it's still fascinating and fun to see.  As is the way it usually is after any trip away from home, we'll all be glad to be back when that time arrives.
Posted by Karen James at 7:01 AM